In 1989, a Boeing 737 crashed on the side of the M1 motorway near Kegworth, England. The jet started to vibrate and according to the indicators on the dashboard one of its two engines was malfunctioning. The chief pilot turned off the engine. Unfortunately… the one that was functional. How did this happen? It turned out that during the vibrations the pilot was not able to read the indicators on the dashboard correctly, because they were simply too small.

This is just an example of how important a well thought-out user interface is. Although a poorly designed interface on contact center platforms does not have such disastrous consequences, according to the PwC Experience is Everything, one in three consumers need only one negative experience to never use the company’s services again.

Such a bad experience may be, for example, waiting too long for a connection with a consultant who works on a non-intuitive panel. The modern contact center system therefore ensures a high-quality user interface experience.

So what should a well-designed, functional contact center interface be like?
Here are the 7 most important features.

1. An interface that meets the needs of both beginners and advanced users

Staff rotation in call and contact center departments is usually quite high. Therefore, a well-designed user interface ensures the quality of work of consultants at different levels of advancement.

For a novice contact center employee, a clear, intuitive control panel is important because it makes the system much easier and faster to learn. This allows him/her to master the work on the platform in a short time.

For experienced users, on the other hand, efficiency and ergonomics in the use of the interface are of primary importance. The correct arrangement of widgets, button colors or menu layout should be designed in such a way that the user can react immediately to a given event.

2. An interface that allows you to work
with any device online

In order to contact the customer service office today it is enough to have a WEB interface providing access from any place with Internet connection.

According to the Digital in 2018 report, more than half of Internet traffic is already generated by mobile devices (52% phones and 4% tablets). Therefore, it is impossible to imagine an efficient work on the contact center platform without a responsive design, which enables comfortable use of applications on a PC, laptop, tablet or smartphone.

Lightweight applications for smartphones are also becoming a standard. They are created primarily for mobile consultants, who can conveniently contact both clients and the headquarters on different communication channels.

3. An interface that allows you to perform all activities in one window

The comfort of the contact center platform user is largely influenced by whether the interface enables the handling of requests related to different areas of the organization, e.g. customer service, marketing, sales or debt collection. A well-designed web application allows to manage services, process messages, report and perform other tasks related to business processes in one place.

The contact center system interface must also support seamless integration with external systems (e.g. CRM system) that provide direct access to data regardless of its size.

4. An interface that provides help and support for the user

According to N. Borenstein, the quality of the support texts is much more important than the mechanisms by which they are used. However, an interface thought out in accordance with the user experience standards can speed up the user’s access to support services.

A very useful function of the contact center’s interface is precisely the context-based guidance, which makes it easier for the user to complete the tasks. An interface that provides feedback on the implementation of changes can also be helpful. If processing errors occur, the cause of the failure will also be displayed, so that similar errors can be avoided in the future.

5. An interface that facilitates repetitive operations

Entering data into the database or correcting them is a time-consuming and – so to speak – boring activity. However, an efficient interface can help the consultant perform these tasks by easily making changes on many records of the same type.

6. An interface that allows the user to easily see the available functions and recognize the operations performed.

The graphic design of the interface is not only intended for decorative purposes. The intuitive interface “directs” the user’s actions, indicating the use of available solutions.

The interface designed in this way will not only speed up the user’s work, but also motivate them to broaden their knowledge of the advanced system functions. This is especially important nowadays, when contact center platforms are becoming more and more complex communication tools.

7. An interface where the user always knows how to perform the planned actions 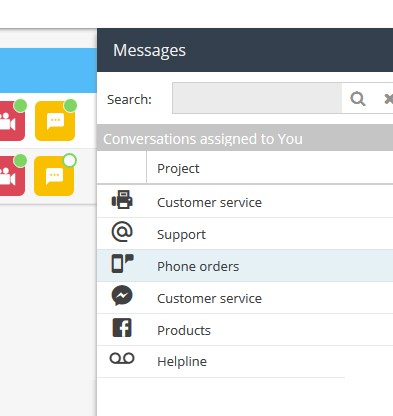 Consistency and coherence are not just a matter of interface layout. It also concerns the logic of the task being performed. The interface elements, which are visually matching, make the whole system easier to use. Consistent handling of colors or graphics shortens the time of training users and increases their work efficiency.

Interface of the contact center system - what awaits us?

The future in designing the interface of contact center systems will undoubtedly be determined by the development of technologies related to task automation and artificial intelligence. They will be based on interactivity. Chatbots, SIRI and Google Assistant applications are already transforming the way people communicate with software. AI will successively take over the role of the user interface in client contacts and internal company communication.

However, before this happens and AI replaces consultants supporting contact center platforms, it is worth choosing a system that supports client experience through an intuitive, easy to use interface.